New from the House of Scalamandré: EVERETT Wallcoverings

Black-owned Home Decor Brands We Should All Be Supporting The scenario seems ripe for a bawdy rom-com: Two gorgeous sisters from London, both high-profile model/actresses descended from British aristocracy, decide to set up house together in sunny Los Angeles; they trick out their alluring Stateside hideaway with a Playboy pinball machine, a nautical bar straight out of Gilligan’s Island, and a stripper pole; margaritas flow freely; high jinks ensue. That, in a nutshell, is the story of Poppy and Cara Delevingne’s intoxicating California home, which, much like the sisters themselves, offers an object lesson in idiosyncratic personal style leavened with sauciness and humor.

“L.A. can be a lonely place. You really have to make an effort to reach out to people. Since one of us was always coming here for one reason or another, being with family just made sense,” Cara says of the unconventional sororal living situation. “This was the chance to build our dream sister house. Miraculously, we’re still talking,” Poppy adds, presumably including her husband, British aviation executive James Cook, in the collective we. 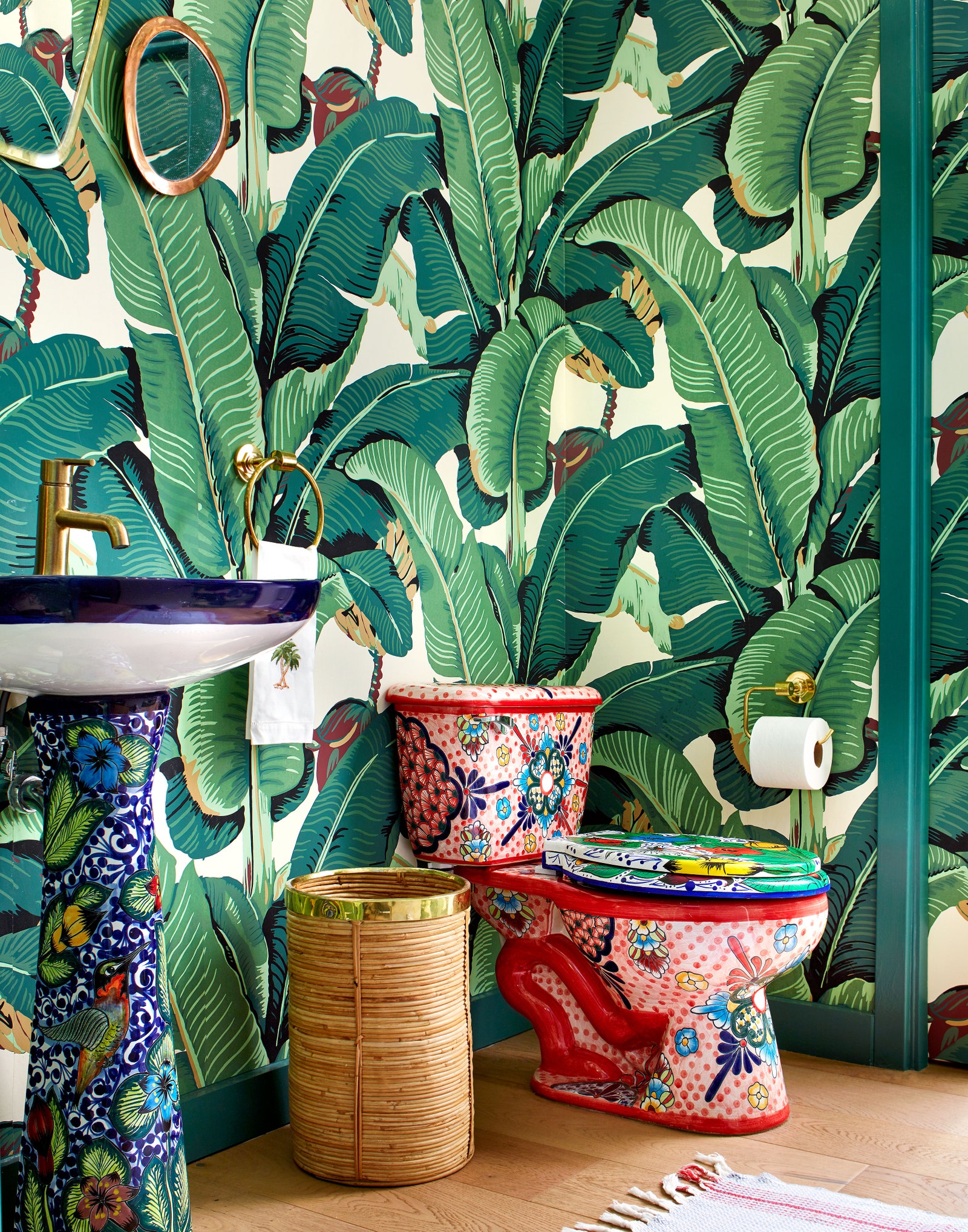 “The fact that they share a house at this point in their lives is incredibly telling. They really are best buds,” observes architect Nicolò Bini of L.A.–based Line Architecture, who worked closely with the Delevingnes to bring their L.A. fantasy to life. The setting for the sisters’ family frolic is a gracious but unpretentious 1950s dwelling, centrally located yet discreetly tucked away on a quiet street, and conveniently outfitted with a pair of master suites on different floors and with two separate entrances. “I wanted to create a true L.A. moment for them, with nods to California midcentury modern, Laurel Canyon bohemia, Beverly Hills swank, surfing culture, and a little Mexico,” Bini continues. “Then we tied all that in with Cara and Poppy’s Englishness to give the house another layer of Delevingne charm.” 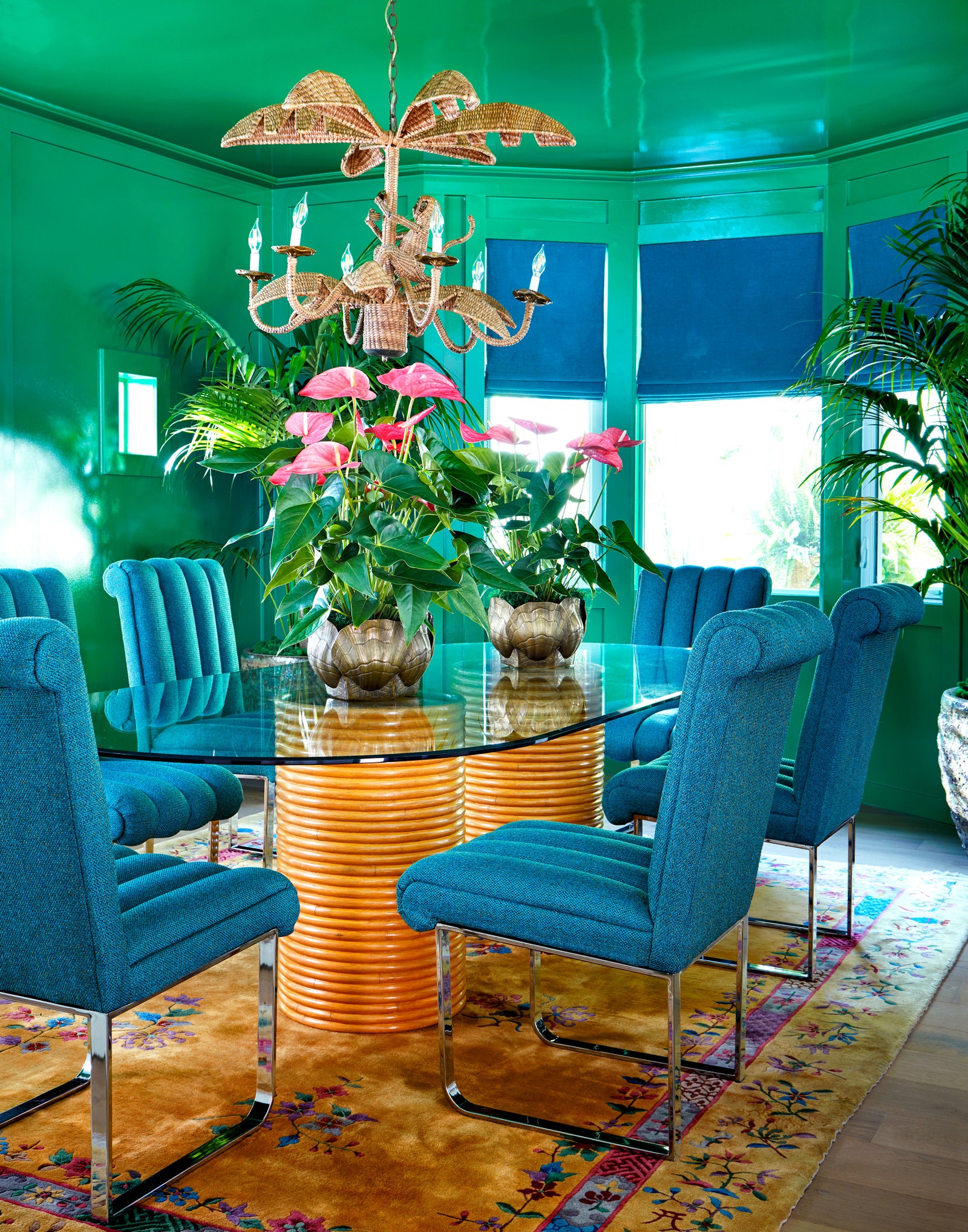 The exotic olio Bini describes finds eloquent expression in the emerald-lacquered dining room, with its rattan monkey chandelier; the pink and green velvet upholstery in the living room; a proliferation of banana-leaf and palm-frond fabrics and wall coverings; striped outdoor umbrellas with a Slim Aarons flavor; and Moroccan sinks procured by Poppy during her honeymoon in Marrakech. 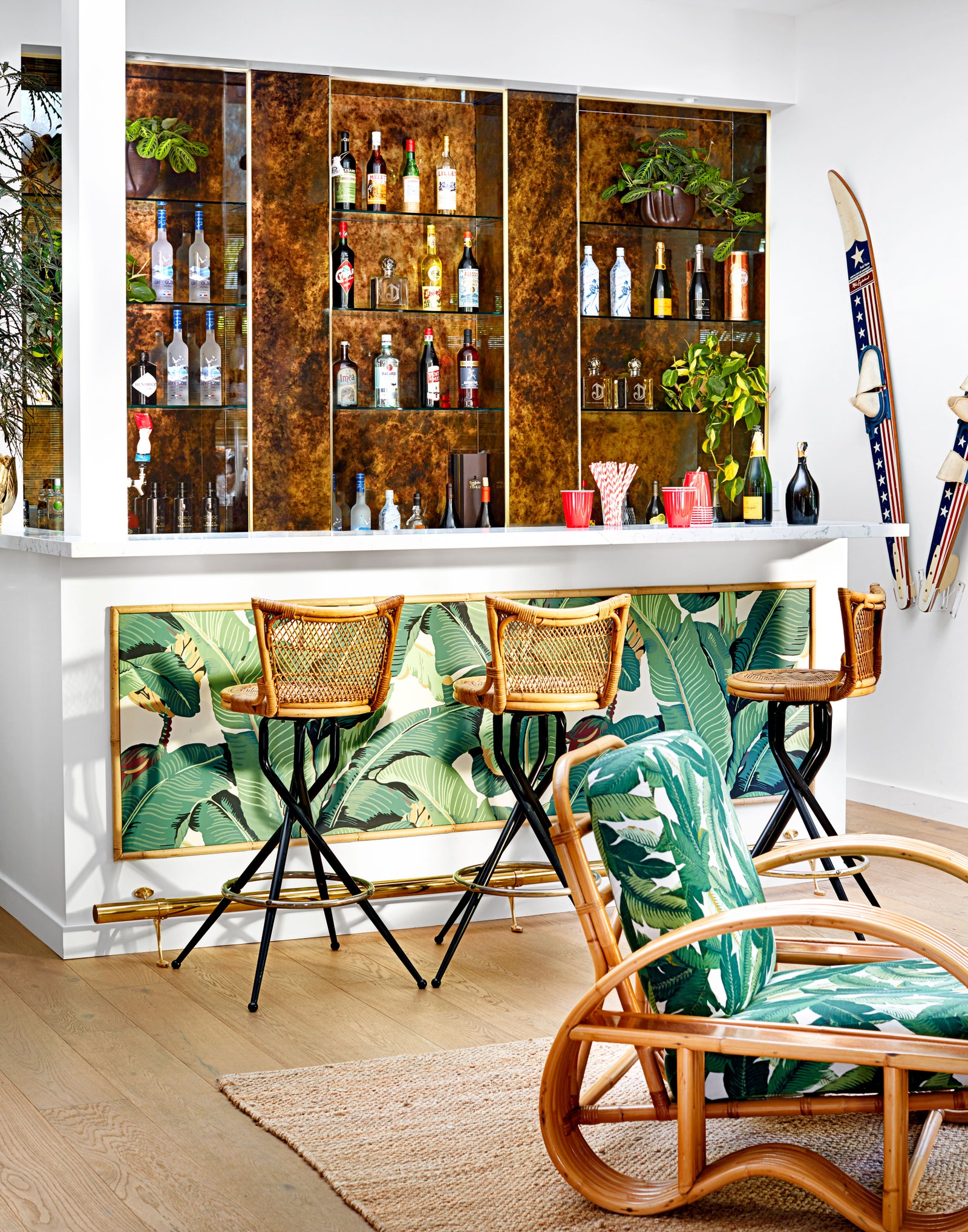 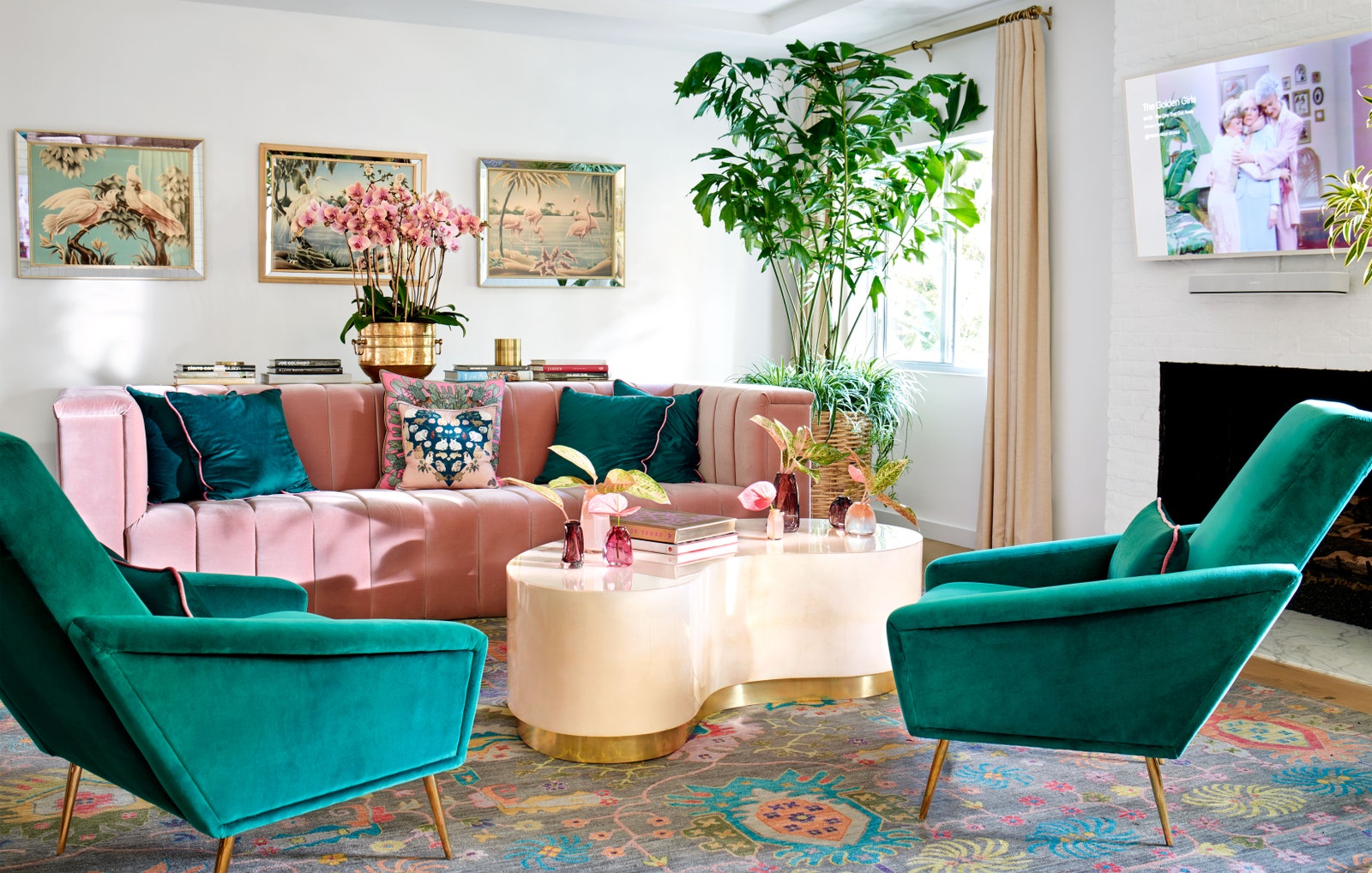 “Poppy has more of an eye than I do. She has impeccable taste, so I let her take the lead on the decor,” Cara says, deferring to her older sister. Poppy sees the division of labor in a different light: “Basically, I’m a control freak. We each made our imprint on the design, but I was the one obsessing over the color of the curtain rings.” For his part, Bini credits both of the Delevingnes for their vision and enthusiasm.

“They were great editors, and they were game for anything. The sentences that started with ‘This is the craziest idea you’ve heard . . . ,’ those were the things we built first,” he notes. As a case in point, he mentions the massive bunk bed in the guest room, a metal-framed structure clad in bamboo, supporting two stacked queen mattresses. “That was Cara’s idea, and it was brilliant,” Poppy enthuses. 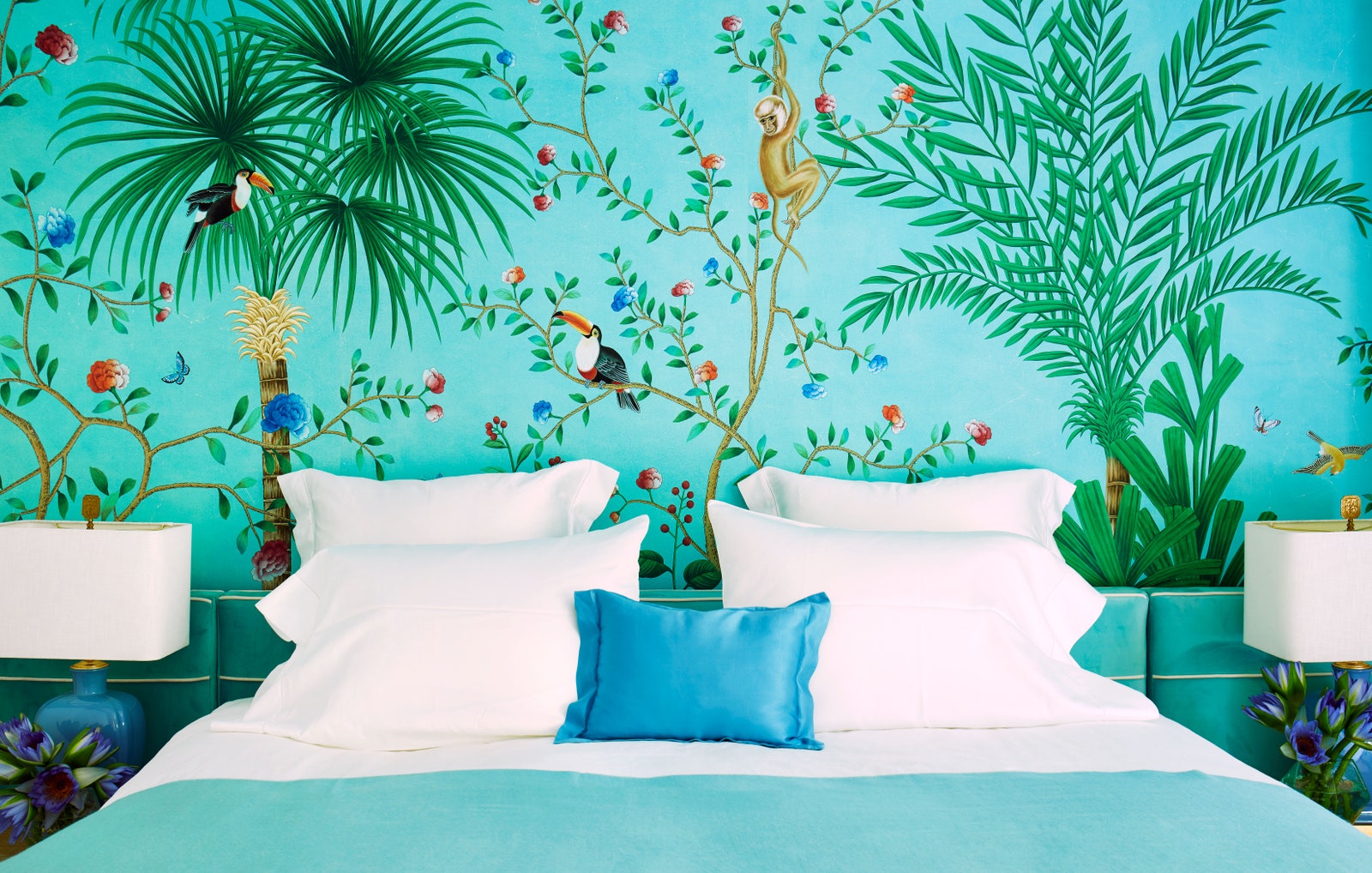 The sisters’ divergent personal tastes come into high relief in the design of their individual bedroom suites. The centerpiece of Poppy’s dreamy, light-filled aerie is a wall covered in a hand-painted de Gournay paper featuring monkeys and toucans cavorting in trees and vines against a field of Tiffany blue. “I fell in love with de Gournay as a teenager. I have a similar paper in the bathroom of my house in London (AD, November 2017). It’s a running theme,” she explains. “For my bedroom here, I wanted to create a calming atmosphere, with pale pinks and blues, Moroccan rugs, and supersoft fabrics. It feels like heaven.”