For Your Next Zoom Chat, Give the Wall Behind You Some Wallpaper Love

The wallpaper business was booming before coronavirus forced us all to contemplate the state of the walls in our home—and in the home of everyone else on our virtual meeting. Those in the industry are taking notice: “We’ve seen a big spike in wallpaper sample orders,” says Noel Fahden, vice president of merchandising at online retailer Chairish. “Many customers are ordering five-plus samples at a time, so they’re clearly considering a range of options.”

Eskayel founder Shanan Campanaro says her business has remained “fairly stable” because it works mainly with interior designers who are working on new buildout and long-term projects that can’t be put on hold. The biggest increase has been social media engagement, though. “Fans at home seem particularly interested in inspiring home imagery right now,” she says.

Family-owned French brand Pierre Frey got lucky: It recently rolled out a new website, and Kim Huebner, who manages its showroom in New York, says clients are quickly adapting to working online. With so much teleconferencing going on, “A woven design that is paperbacked and applied to the wall will help with acoustics,” she suggests. “And remember to choose a flattering color to make your image look good on screen.” 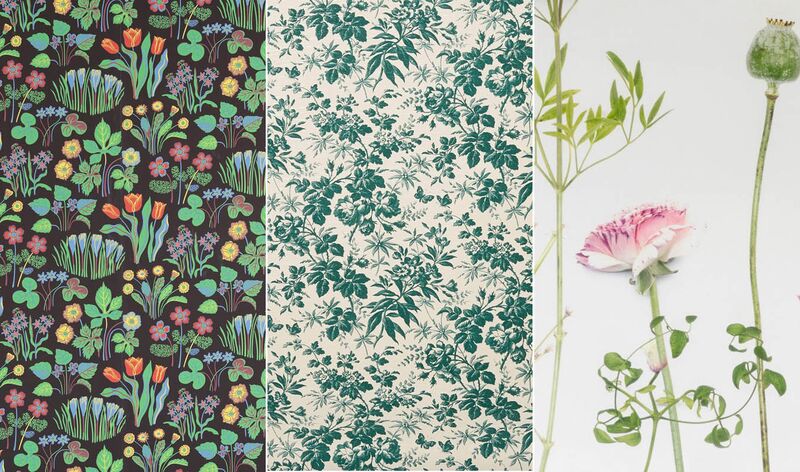 One of the most loved wallpaper designers is Josef Frank, an Austrian-born architect who moved to Sweden in 1933 amid rising anti-Semitism in Europe. “All of Josef Frank’s prints are bold and colorful,” says Thommy Bindefeld, creative director of Svenskt Tenn, a Swedish interiors company founded in 1924. “Even though many of them were designed during the Second World War, [they] are very joyful and playful.” The mix of fantastical and realistic drawings in his Varklockor design (above, left) includes such spring flowers as tulips, crocuses, dandelions, and forget-me-nots.

Less bold, but no less unique, is Gucci’s new Herbarium print (above, center) from its spring-summer 2020 collection. Its floral design also comes in a variety of colors. Status brand Calico Wallpaper, meanwhile, has produced a couple of more subtle flower-inspired patterns, including Flora (above, right), which evokes “the eternal calm and serenity of an open field.” 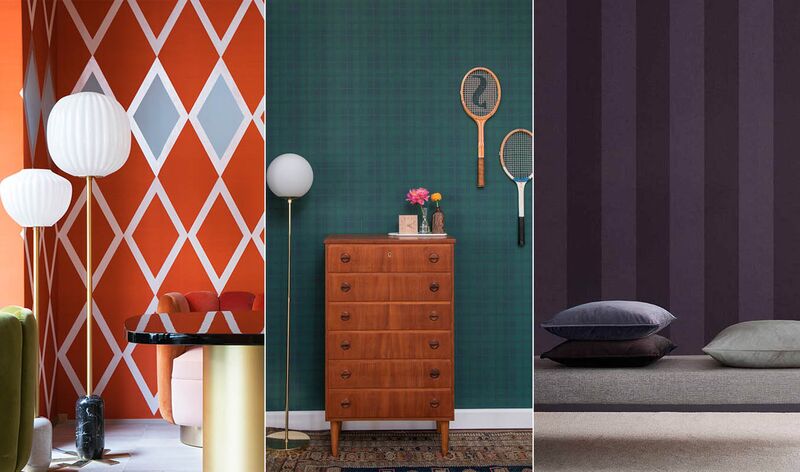 One low-risk way to dip a toe in the wallpaper waters is with removable options. Graduate Plaid (above, center) by Chasing Wallpaper gives off an intellectual’s library look, while Graham Brown’s Plum Heritage (above, right) is a luxurious, versatile stripe that can be hung vertically or horizontally. 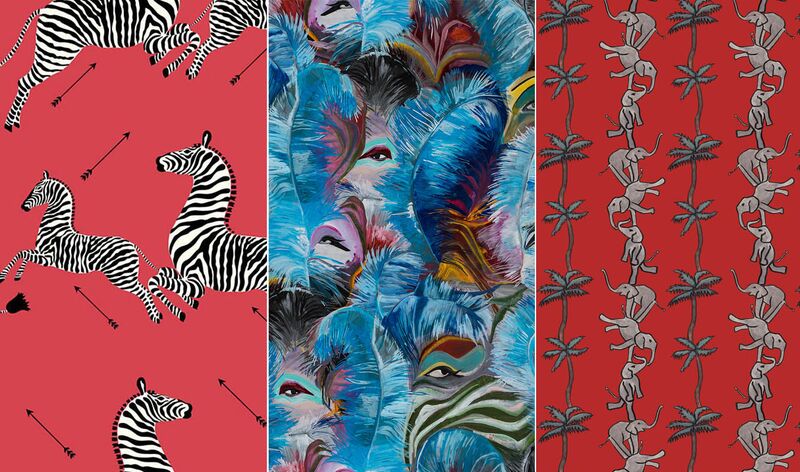 The playful zebra print (above, left) was designed by Flora Scalamandre in 1945 and was originally intended for use in Gino of Capri, a restaurant in New York’s Upper East Side. The print has since been used by many retailers, including Barney's and Kate Spade, as well as in such movies as The Royal Tenenbaums  and Mighty Aphrodite. If that’s too twee for your 10 o’clock appointment, Chairish’s Fahden recommends scenic, botanical, or verdant patterns.

For even more personality, Voutsa’s Plumes and Eyes pattern (above, center) gives the impression of depth with its insanely detailed feathers, and he’s got a forthcoming Birds collection, too. And who doesn’t love elephants? The Totem Tunis pattern from up and coming Los Angeles studio Work and Sea proves that animal patterns don’t have to be relegated to kids’ rooms. 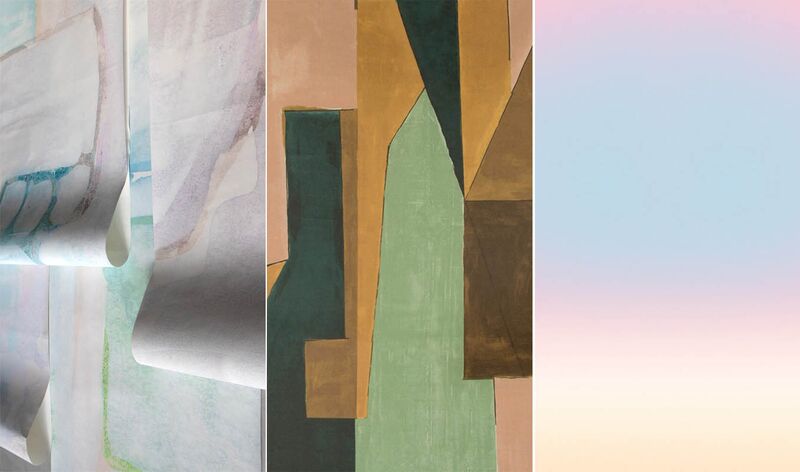 Softer colors can sometimes look better on camera. “So many of our patterns have been used in home offices,” says Eskayel’s Campanaro. “They each feel right depending on the intention. Sometimes a bright vibrant paper like Splash in cerulean can spark lively thought, and other times something more calming and subtle like Nairutya in chalk is nice for quiet contemplation.” Portico (above, left) is its latest. It’s based on the whitewashed walls in Ostuni and other towns in the Italian region of Puglia, where is where her father’s family is from.

District, the latest pattern (center) from Kelly Wearstler, comes in a variety of colors and makes you look like you’re in an actual painting. Triad No. 5 from Wallpaper Projects (right) is one of a few lush colorways that have the benefit of also feeling cheerful. 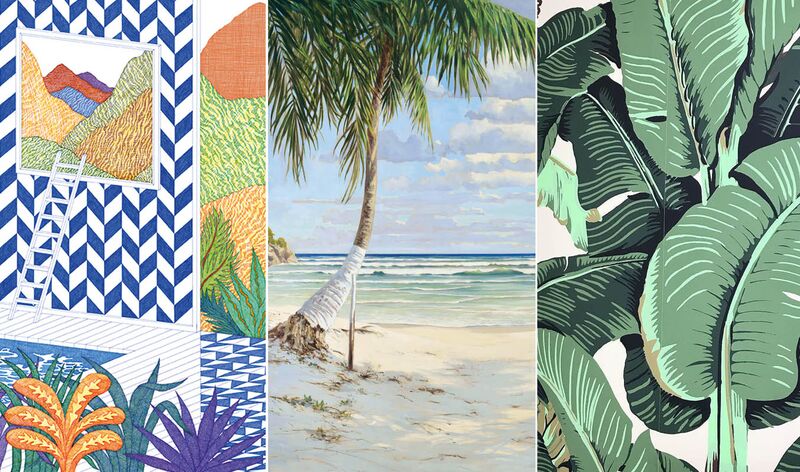 The newest wallpaper collection from Hermès doubles down on the wish-you-were-here vibe. Its Decor Mural Tropical (above, left) is the image of a villa’s window looking out from a pool. The inspiration for Pierre Frey’s Ixtapa Ocean (above, center), meanwhile, came from a vacation video by the company’s chief executive officer, who worked with an artist to recreate the scene of waves rolling onto a beach in Mexico. The scale, notes Huebner, allows you to feel as if you’re part of the scenery. One of the most famous classic wallpapers: Martinique (above, right) was designed for California’s Beverly Hills Hotel, where much significant work has been accomplished.